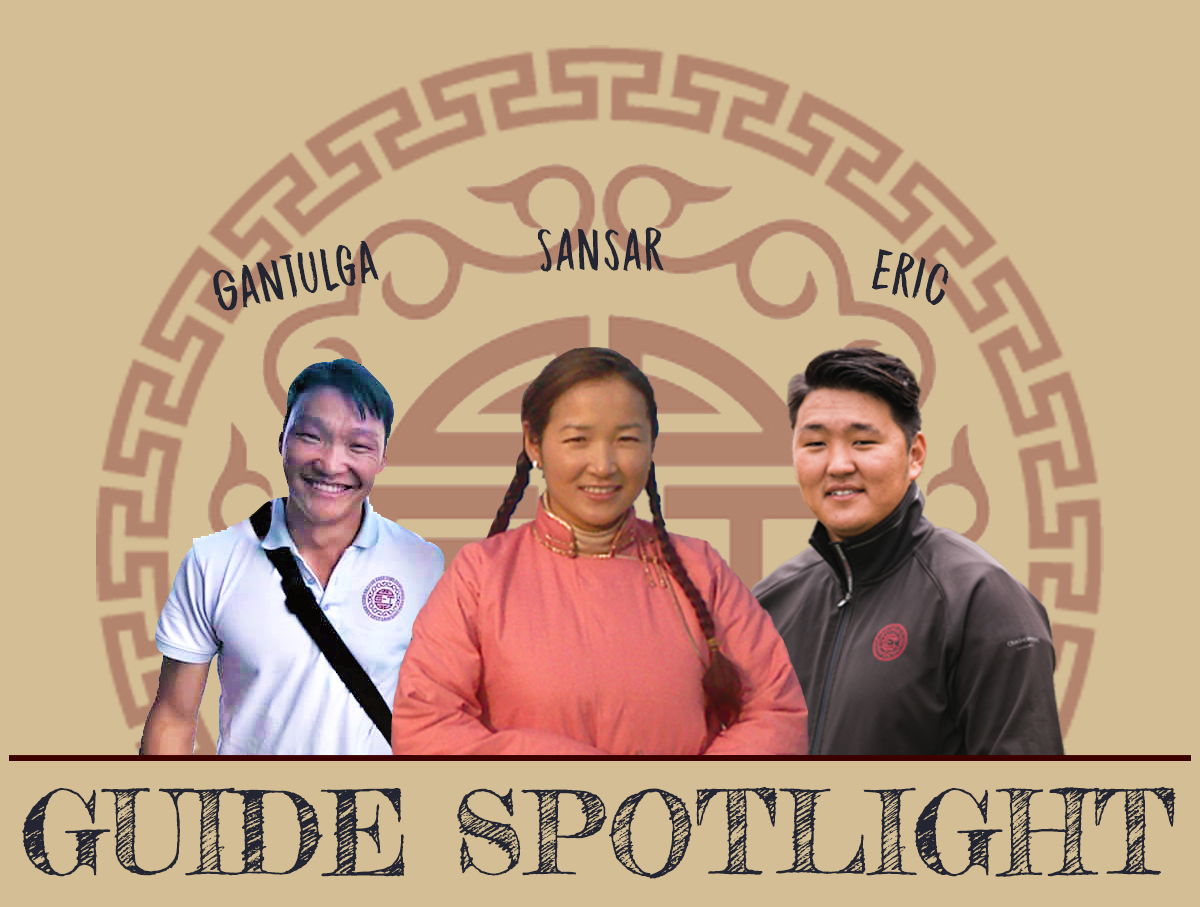 In this month’s spotlight are the fantastic guides Gantulga, Eric and Sansar, who have all worked for Goyo Travel for several years. Let’s meet them… 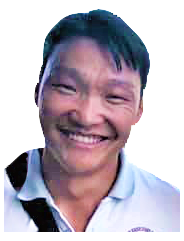 Gantulga – also known as Tulga – spent much of this childhood in central Mongolia, where he could be found riding horses and herding livestock. His family moved to the capital Ulaanbaatar where he then studied Transport & Logistics at a local university. Tulga now spends his summers leading tours and enjoys spending winter in western Mongolia. His hobbies include archery, basketball, volleyball and exploring nature. 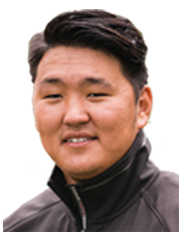 Eric comes from a yak herding family in the western Altai Mountain region. When he was younger his parents moved the family to Mongolia’s second-largest city, Darkhan, so that Eric and his brother could go to a good school. After graduating, he got himself a scholarship and completed his studies in the United States before returning to Mongolia. In his spare time, Eric enjoys playing chess, basketball and practising his wrestling skills. 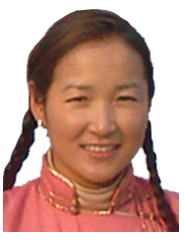 Sansar grew up in eastern Mongolia and moved to Ulaanbaatar when she was 18 years old. Since then she has spent 6 years working at the Choijin Lama Temple Museum, had 2 children, gained a bachelor’s degree in Tourism Management and a Masters in Business Administration. In her spare time Sansar loves to read, hike, ride horses, and spend time with her children.

What first attracted you to becoming a tour guide?

Tulga – “The reason I became a tour guide is because I’m very proud of my country. I enjoy guiding people through our beautiful landscapes and nature. Also, guiding means having fun and messing around with people.”

Eric – “I decided to become a guide because I’m so proud of my unique country, Mongolia. I love sharing our culture, traditions and landscapes with guests.”

What do you love about working for Goyo Travel?

Sansar – “I enjoy working for Goyo Travel because they have a great group of people – I really enjoy working with my colleagues here.”

Tulga – “The Goyo Travel team is as caring as a family, and as reliable as a clock. I also love that we have the coolest uniform in the business.”

What is your funniest memory with a group or client(s) you were guiding?

Tulga – “This year I guided a group of very competitive and fun guests from Malaysia. They were playing some drinking games and the final round was a card game. Eventually, there was no vodka left on the table. As the game was so heated, they agreed to then use soy sauce. Watching them drinking soy sauce and ending up a little sick as a result was the funniest memory of the year for me.”

Eric – “I had a group of eight guys with me, and I decided to organise a mini-Naadam Festival for them to experience. We managed to include wrestling, archery, horse racing, tracking, eating mutton and learning about Mongolia. It was so funny because the guys were all so competitive when taking part.”

Sansar – “One day I had a group of 4 people invited to a new ger ceremony in central Mongolia. They were offered 4 litres of Airag (fermented mare’s milk), and told they must finish it in one sitting as punishment for arriving late. They were shocked and asked me to save them. Finally, I managed to finish off all 4 litres – something I’ll never forget, and now I take more care when attending ceremonies as a guide!”

Have you travelled abroad before? Or where would you like to go in the future?

Sansar – “I have travelled abroad before, including to Switzerland to meet some friends. In the future I’d like to go to Japan as I speak some of the language and have learnt a lot from Japanese, such as their good, kind-hearted culture.”

Eric – “I have travelled to the USA, India, Russia and China before. It was snowing when I was at the Red Square in Moscow and the New Year atmosphere was wonderful. December and January are a great time to visit Moscow!”

What activities do you most enjoy doing whilst on a tour and why?

Tulga – “Horse and camel riding is always fun. Horses are a national icon and a huge part of Mongolia’s history, so I’m very proud to showcase horses and riding to our guests on tours.”

Eric – “I enjoy taking part in the three manly games of Mongolia – wrestling, archery and horse riding. They’re great fun to take part in, watch, and get guests involved with.”

If a film was made about you, which Hollywood actor would you most like to play you and why?

Sansar – “Angelina Jolie – because I have a lot of respect for her and she gives me a feeling of power.”

Tulga – “If there was a film about my life I’d love to be played by Ralph Fiennes. He’s very unique, and I’m a big fan of his work.”

Eric – “The Terminator – Arnold Schwarzenegger! This is because I’m a tough man. I would not only be your guide, but also your bodyguard in Mongolia!”

What’s your favourite song to sing at karaoke?

Tulga – “It has to be Aerosmith – Don’t Wanna Miss A Thing.”

Any tips you have for someone travelling to Mongolia?

Tulga – “If you are going to be visiting nomadic people, bring something special and unique from your country. Our people are very interested in your culture and would really appreciate to see or have items from your home country.”

Sansar – “Hmmm, there are so many tips I could offer. One would be to make lots of friends when travelling to Mongolia. Another would be to try and learn some basic Mongolian. Locals are very happy when you try to and speak a little Mongolian with them. Finally, sing a song, Mongolian’s love to sing and hear other people singing any song.”