For people who like to be in the saddle, Mongolia has to be one of the top destinations on their wish list. Renowned worldwide for its vast plains, beautiful steppe, forests, and the Altai Mountains, Mongolia is the perfect country for keen riders, and we have a variety of both private and group horse trekking tours. Horses are an intrinsic part of Mongolian culture; they are held in the highest regard and are a symbol of national pride. It was once even said that ‘to appreciate the Mongol you must see him on horseback, and indeed you rarely see him otherwise…’ and you will indeed find this to be true. Mongolia’s affinity with horses goes back centuries, with the most famous period of Mongolian history being the rule of the Mongol Empire under Genghis Khan. The warriors of the Mongol Empire were unstoppable atop their trusty steeds, which played a vital part in the Mongol Empire taking over 16% of the earth’s landmass, and 25% of the world’s population. It is also said that Mongolians invented ice cream, and all thanks to the countries fast galloping horses. Rations of cream were simultaneously frozen and vigorously shaken whilst horsemen galloped through sub-zero temperatures across the steppe towards China, from where Marco Polo reputedly brought back the idea to Italy after his travels in the 1200’s.

Mongolian horses are of a stocky build, with relatively short but strong legs and a large head – check out our short video of these beautiful animals here. They range in size from 12 to 14 hands high. Despite their small size, they are horses, not ponies! They have great stamina, and although they have smaller bodies, they can gallop for 10kms without break. The hooves are very robust, and very few animals are fitted with horseshoes. In terms of riding, Mongolian riding is a little different to the Western style that you may be familiar with. Their small stature means that their stride is short and choppy, this is best dealt with by standing in your stirrups at anything above a walk as the Mongolians do. Horses respond to neck reining and using your weight to stop the horse is useful. Before mounting your guide will give you a few tips and whilst riding, you will always be with your guide who will be able to translate any questions or queries to the horse wrangler. Comfortable saddles are provided as opposed to the less forgiving traditional Mongolian ones. 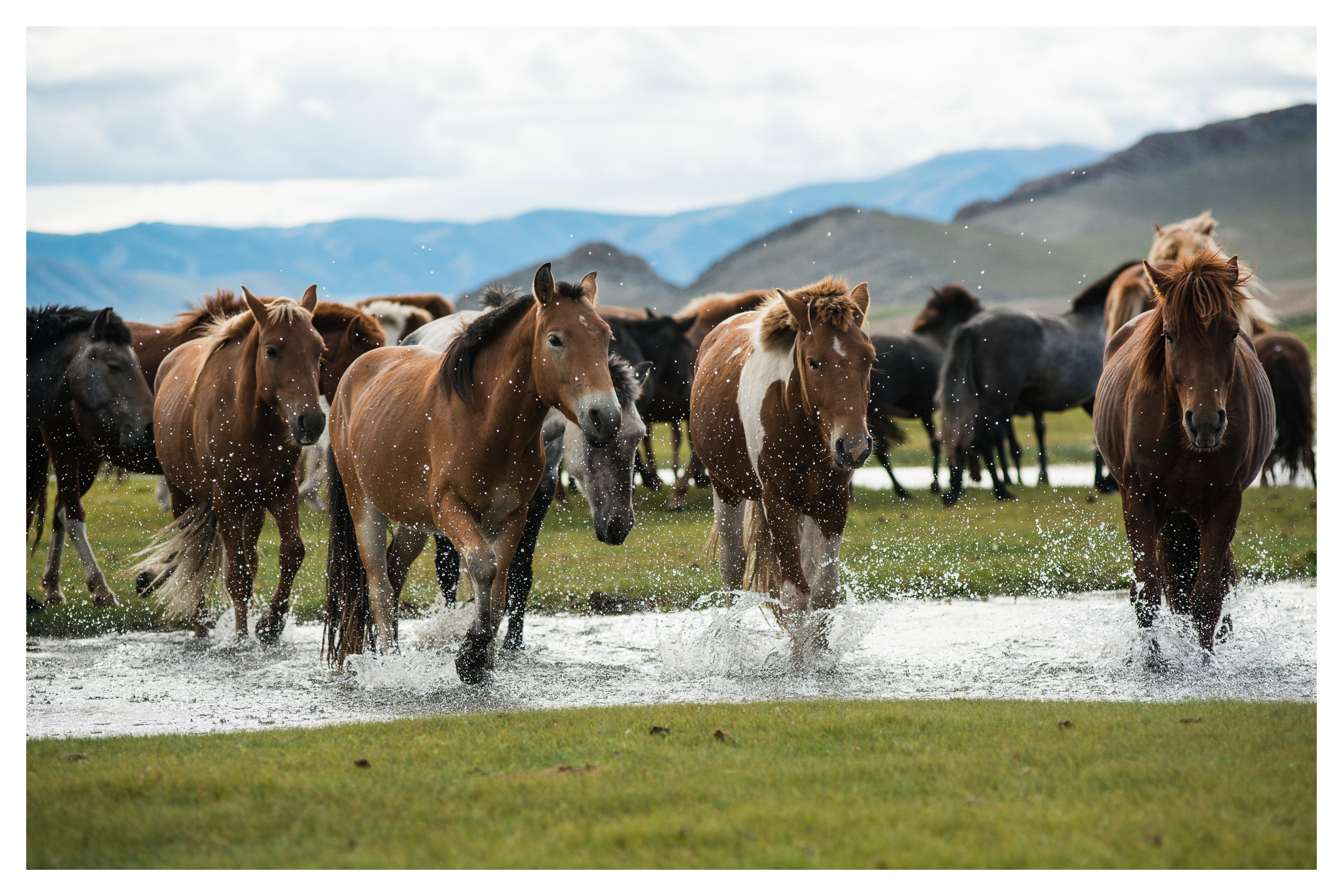 Each year, many festivals take place across Mongolia, including a horse festival which takes place near the famous Karakorum (now known as Kharkhorin). The aim of the festival is to exhibit Mongolian horse skills and celebrate all things equine. Over 100 horsemen and riders participate in the events which include ‘whip pick-up’ (on horseback); Horse Lassoing (on horseback and on foot); Horse taming; traditional Mongolian singing; an Airag (fermented mare’s milk) drinking competition; Colt racing; wrestling and tug-o-war. This festival can be incorporated in to many of our private central Mongolian tours, and we also include the festival in our 8 Lakes Ride & Horse Festival group tour. 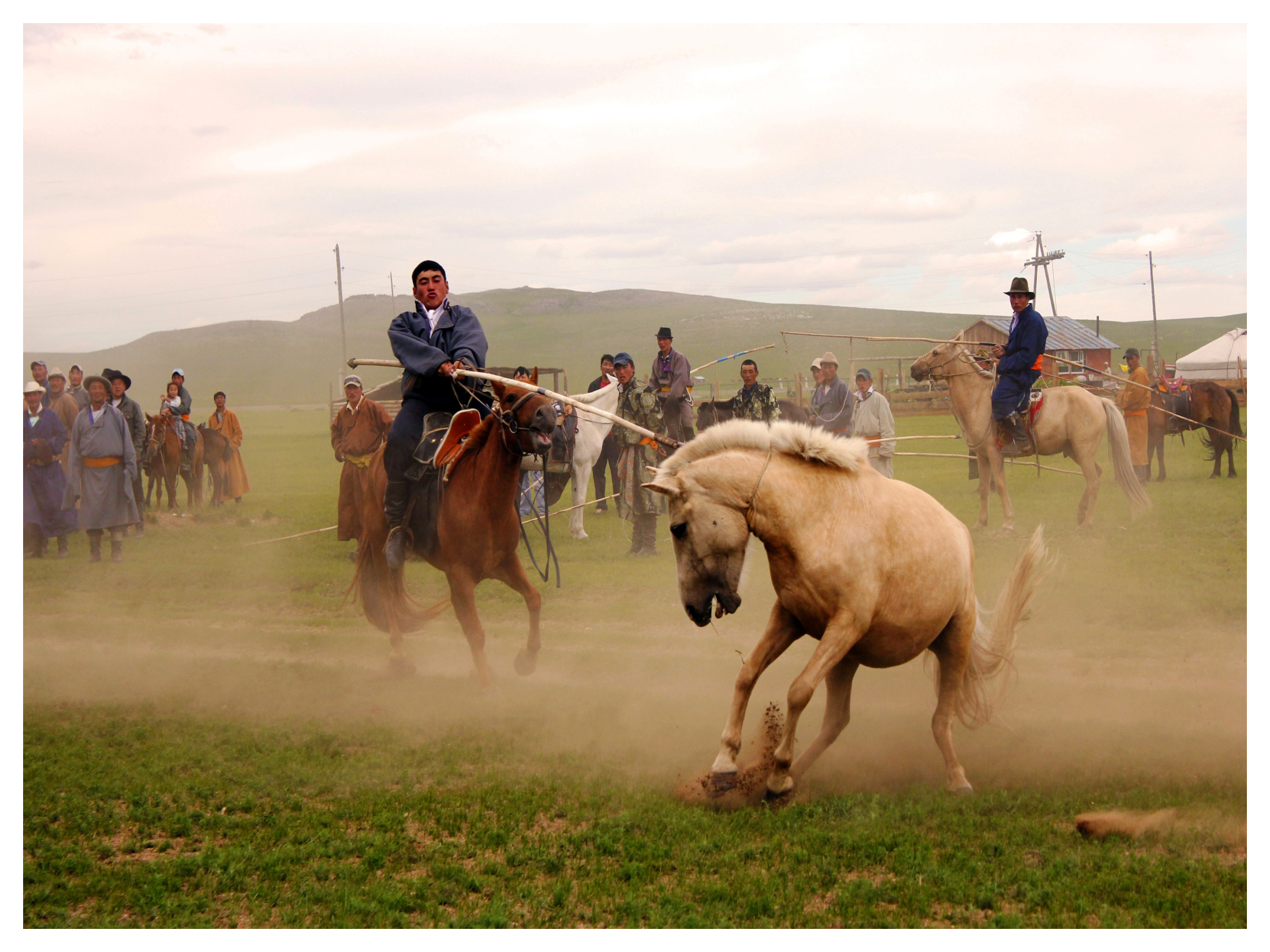 Horse based products in Mongolia

One of the most popular horse-based products in Mongolia is airag. Airag is a fermented dairy product which is traditionally made from horse milk. It is very light in body compared to most dairy drinks. It has a unique, slightly sour flavour with a mild alcoholic content (0.7-2%). The initial fermentation takes two to five hours at a temperature of around 27°C. In Mongolia the milking season for horses traditionally runs between mid-June and early October. During a season, a mare produces about 1000 litres of milk. Half is traditionally left to the foal – the rest is drunk by the family, and/or sold.

Another item that can thank its existence to the Mongol horse, is the horse head fiddle. It is one of the most traditional instruments in Mongolia, and also known as morin huur. The two strings on a horse head fiddle are made from horse hair, and it has a beautifully carved horses head as the peghead. It is most often used to accompany traditional Mongolian throat singing (Khoomi), a unique practice which simultaneously uses the throat and the nose to make two different sounds or the ‘Long Song’ in which 10 words can last up to 4 minutes! Legend has it that the fiddle was originally made by a grieving shepherd whose horse passed away. It was made from the horses skin and hair, and used to play poignant songs about his horse. 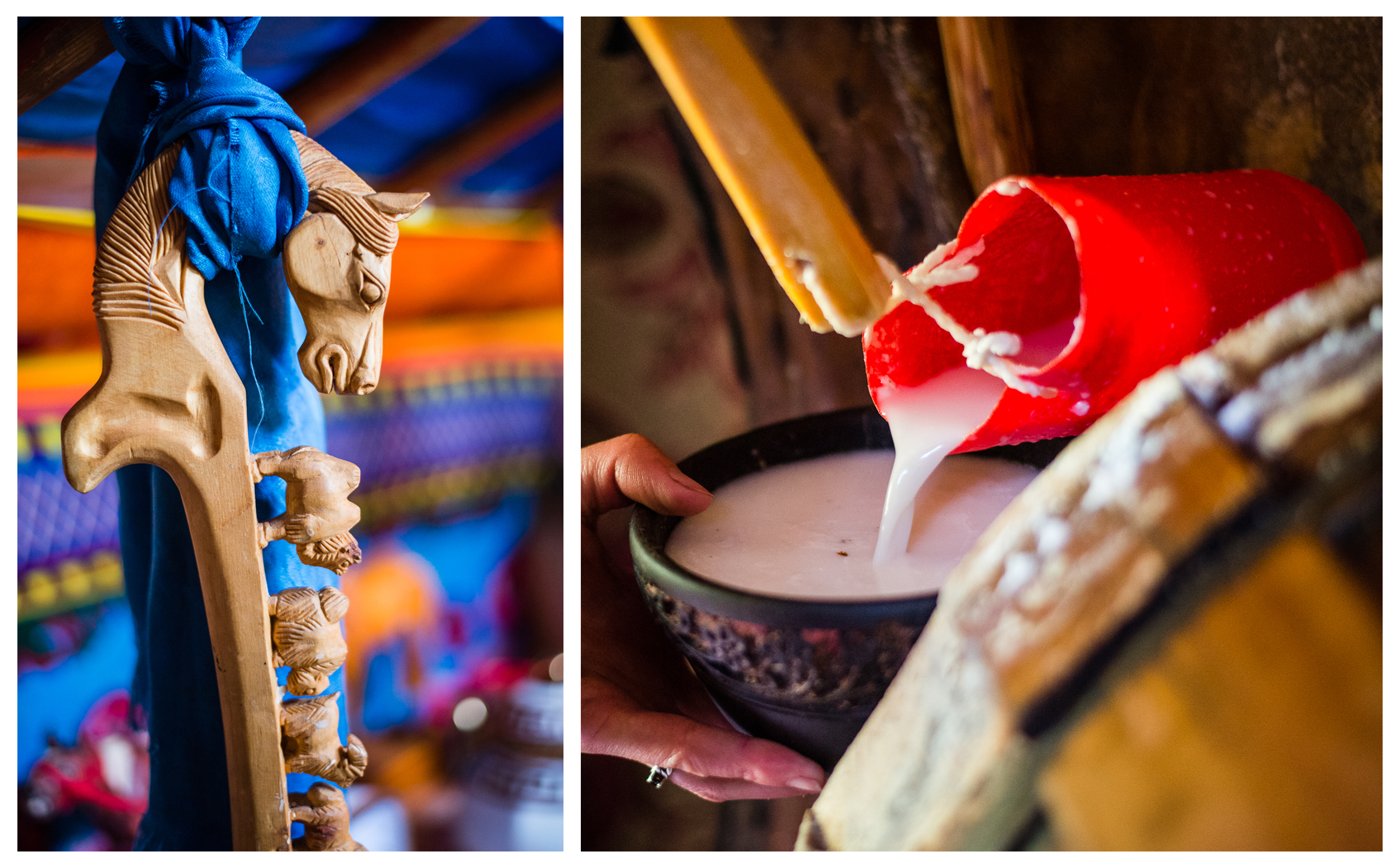 The Orkhon Valley holds a very special place in both the hearts of the Mongolians and in the culture of the world. Inscribed in 1992 by UNESCO as a World Heritage Site, it is said to be the ‘cradle of nomadic civilisation of the steppes’ and held the seat of imperial power. It is easy to imagine such an empire unfolding beneath you as you stand on the edge overlooking the elbow of the Orkhon River. With this beautiful cultural landscape spanning over 300,000 acres, there is no end to the amount of beautiful areas for horse riding. There are the 8 Lakes to the south of the reserve, with crystal clear waters the reward after riding through the stunning Buurgin Valley. Other beautiful areas can also be discovered by horseback, from the Orkhon Waterfall to the narrow, forested valleys of the Khangai Hills, a trek covered in our Orkhon Valley Ride tour.

60kms east of Ulaanbaatar you will find Terelj National Park. Characterised by undulating hills, interesting rocks formations, a network of streams and river, and lush valleys inhabited by nomadic families, this park provides enough unique scenery to make every days’ ride an awe-inspiring experience. With key areas such as Ar Khurkh Valley, Khotol Pass, and Altan Ulgii Mountain, riding through Terelj provides fantastic wildlife spotting opportunities, as well as the opportunity to visit nomadic families, and kayak on the Tuul River. In addition to this, the park joins on to the Khan-Khentii Specially Protected Area, which is home to moose, brown bear, weasel and over 250 species of birds. If you want to embark on a multiple day horse trek in Mongolia, and don’t want long car journeys to other parts of the country, our Trails of Terelj tour is for you.

Khovsgol is Mongolia’s northernmost province, bordering with Russian Siberia. It is characterised by mountainous terrain, larch forests, rivers and the vast lake that shares its name. As well as a wide variety of plentiful fish and bird life, the area is home to endangered animals such as reindeer, moose, ibex, Argali (horned wild sheep), otters, sables, martens, bears, deer and musk deer. With this plethora of wildlife, beautiful blue lake, abundance of forests, as well as characterful ger camps and nomadic reindeer herders, Khovsgol is easily one of our favourite areas for horse riding, whether it is for short rides around your camp, or longer journeys in to the remote areas south, north-west or east of the lake such as on our Hooves of Hovsgol tour.

The Altai Tavan Bogd National Park in western Mongolia covers 6,362 km². Within it’s boundaries is Mongolia’s highest mountain, Khuiten Uul – Cold Mountain – which stands at 4,374 m, plus Lake Khoton, Khurgan, and Dayan and 34 glaciers. The area is characterised by high glaciated snow-capped mountains, alpine and sub-alpine forests, large lakes, rivers and streams, mountain grasslands, barren rocky mountain ranges and semi-arid desert type valleys. This fantastic scenery and diverse, rugged landscape make it one of the toughest yet most rewarding parts of Mongolia for hiking and riding. The beautiful, dramatic scenery of the high peaks alongside the glacial streams and blooming flowers means that this National Park joins the list of our favourite riding destinations. The protected area also offers a home for many species of alpine animal, such as the Argali sheep, Ibex, Red deer, Beech marten, Moose, Snow cock, and Golden eagle. In addition to the wildlife to keep an eye out for, the Altai Mountains have also been inhabited by nomadic people for around 7000 years, including the world famous eagle hunters, who you can not only live alongside, but also go out riding and hunting with them on our Eagles of the Altai group and private tours.

To the East-northeast of Ulaanbaatar are the Khentii Mountains and Forests – a mountain range in the Töv and Khentii Provinces in north-east Mongolia. The chain overlaps the Khan Khentii Strictly Protected Area and includes Mongolia’s sacred mountain, Burkhan Khaldun, which is associated with the origin of Genghis Khan. Rivers originating in the range include the Onon, Kherlen, and Tuul. Genghis Khan is thought to have found a beautiful place in the Khentii Mountains, called the Great Taboo or Ikh Khorig by the Mongols, where he sat down and stated that he wanted to be buried there. This is suspected to be the area in which he was buried. This collection of relatively unventured rivers, forests and lush hills and valleys create a beautiful area, for riding and trekking, and can be seen by following a tour such as our Exploring Khentii private trip.