Whether you’re watching a documentary about the Mongolian countryside or discussing a trip among your friends, you will notice that there is one thing that always turns heads: Mongolian cuisine. It is one of the most unique out there, with a blend of Asian and European flavours and influences. Pastries, noodles and dumplings couple with soups, stews, meat, and veg dishes plus much more. Due to the nomadic culture in Mongolia, many dairy products are also consumed, with curds and cheeses of all shapes and sizes made from the milk of a variety of livestock such as cows to camels.

Mongolian food tends not to have the same level of spice and heat as many Asian cuisines, but it certainly is largely influenced by the rest of the continent. Similarly, the drinks in Mongolia are a bizarre mixture, and as you can probably guess, very dairy-oriented. With the Russian influence, it is no surprise that vodka plays a large part in Mongolia’s drinking culture, though you will also find a variety of beers and wines too. In addition to this, and especially in the countryside, you will find drinks you have never seen before, such as camel milk tea, yogurt vodka, and airag. This blog will delve into the world of Mongolian cuisine so that you can get a real taste (pun intended) of what to expect on a Mongolian adventure. But no need to worry if you have any dietary requirements or don’t like the sound of anything, as here at Goyo Travel we can cater for a wide variety of dietary requests – from vegans and vegetarians to those with lactose intolerance or allergies. You can also check out our short youtube video on Mongolian cuisine to get an idea of how food is prepared and served on our trips.

Most of the traditional snacks consumed today were once part of an essential provision for the nomadic empire and their army which ventured far, far from home on a regular basis. The relative ease of making traditional Mongolian snacks, along with the fact that they often have a very long shelf life, are especially welcomed by the nomadic families out in the countryside today. As you can imagine, they can’t just pop to a supermarket to buy food, nor do they have a fridge and freezer to store it.

Boortsog – Whether you’re visiting a nomadic family for the first time or the 100th, one thing you will always find on the table is a dish full of boortsog. Consumed on daily basis these deep-fried, golden brown dough “cookies” are a classic staple. This is the case for Mongolians in the city as well as the countryside, and often make a good light snack in the office. Also, as not everybody makes it the same, you will run into many shapes & flavours of boortsog during your time in Mongolia, from plain straight sticks, to knotted boortsog with a hole in the middle, to round or square shaped chunks.

Tsagaan idee – Another daily nomadic snack you will most definitely find is the wide range of dairy products which are usually consumed for breakfast, during teatime or when guests drop by. These include öröm (clotted cream), khailmag (caramelised urum), aaruul (dried curds) and eezgii (dried cheese). You will be invited to try some but be sure to let your guide know if you are lactose intolerant! As well as at homestays, you will also see these dairy delights dotted all over the place, especially at any markets you pass by. Aaruul will come in various shapes and sizes from little individual twirls, to big blocks.

Buuz – The very classic of Mongolian traditional cuisine, buuz are deliciously filled round dumplings, that are slightly meatier than their Oriental counterparts. They are made by wrapping meat (usually mutton or lamb) in dough and steaming it over boiling hot water. Ingredients can be from the most basic – simple meat, salt and dough – to a much more sophisticated way of mincing the meat with fresh vegetables and herbs. On your travels in Mongolia, you will definitely have the chance to try and perhaps even make this local staple, which can be served either on their own, or perhaps in a bowl of soup. If you want to try making some at home, you can follow this Buuz Recipe.

Khuushuur – To put it simply, khuushuur are a flattened & deep-fried version of the buuz. The preparation method is similar to the buuz and with the same core ingredients – minced meat with veggies wrapped in dough. However, whilst buuz is surrounding by the dough into a ball shape, khuushuur is made by flattening the mix, folding over the dough so that it is in a D shape, and then crimping the edges. You can find khuushuur that have a perfectly flat edge, or you can get them with a more patterned edge. Cooked in hot oil until the dough turns golden brown, these “turnovers” are vastly consumed by the locals, especially during the festival season when it is said that you haven’t had your Naadam until you’ve eaten khuushuur.

Tsuivan – This is a dish consisting of stir-fried meat & veggies with dough noodles – very popular all over Mongolia. Typically made by frying meat and veggies, then adding water and dough noodles which are steamed by the “soup”. This process gives the noodles a very solid flavour. This dish is so commonly eaten among the population that almost every restaurant in Ulaanbaatar offers it. So when in doubt about what’s on the menu, order a tsuivan!

Guriltai Shul – Also known as lapsha or noodle soup, guriltai shul is one of the most popular types of soup in Mongolia and one you will most definitely have for dinner at a nomadic homestay somewhere along your journey. The ingredients are so similar to that of tsuivan, that if you accidentally add too much water while making tsuivan you may as well make a guriltai shul instead. 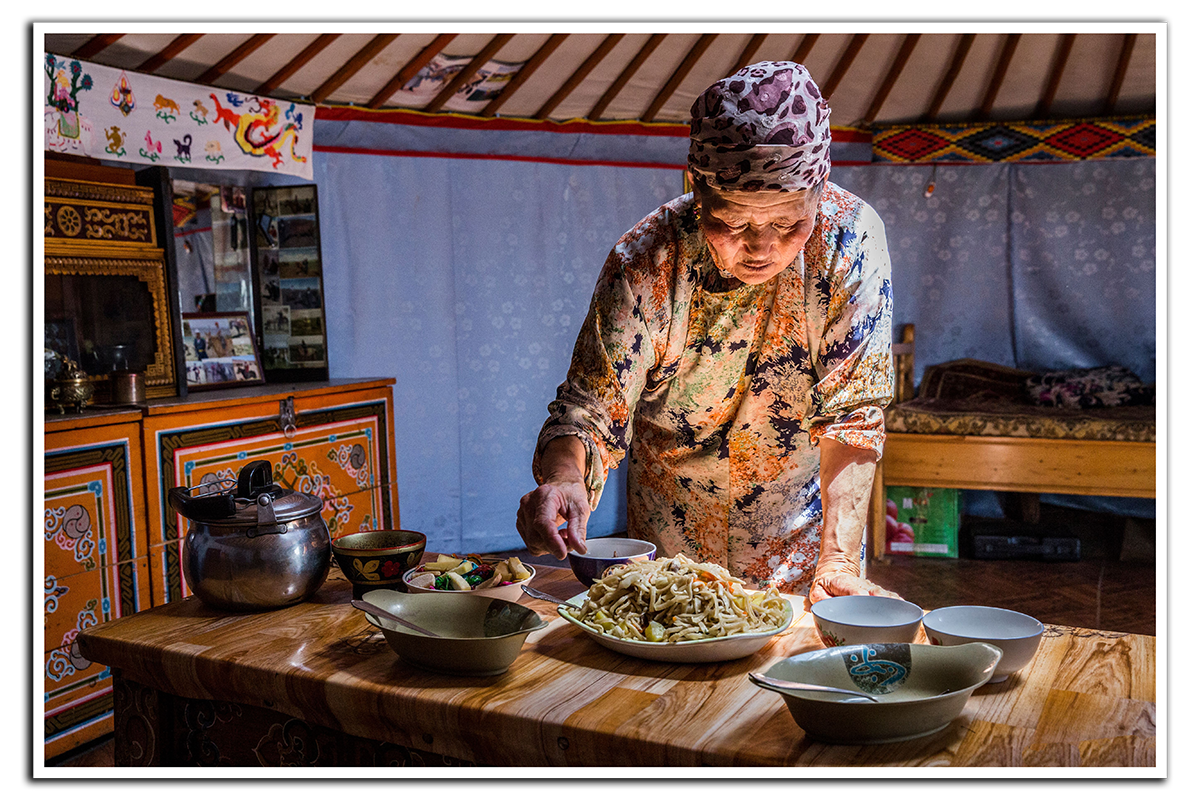 Khorkhog – Traditionally made with mutton, khorkhog is a type of barbeque that is very popular in Mongolia. It is prepared by cutting the mutton into medium-sized pieces and placed in a metal milk jug along with incredibly hot stones and water. Sometimes whole potatoes, carrots and onions are placed together and it is cooked over a fire for approximately 3 hours. After this, the Mongolian barbeque is ready to tuck into. Often, it is all put together in one large bowl, and guests and family members sit around picking out the incredible tasting chunks of meat and veg. Some meat will also still be on the bone, so just slice away and enjoy! We will always try to arrange a feast of khorkhog for you during a tour, especially if you are on one of our cultural trips which includes nomadic homestays.

Boodog – A true frontier’s dinner, boodog is a historical Mongolian dish that dates to the era of Khans and Khanates. It is told that when Chinggis Khan had a victory he would hold a banquet of boodog for his trusty warriors, as this dish does not require any special cooking equipment or skills and perfectly fits the lifestyle of a nomadic army. Even today the boodog is made with a warrior’s solemnity. A sheep (or a goat) would be butchered, gutted and deboned while keeping its skin intact. Then the meat is seasoned and placed inside the skin along with red hot stones. before being tied back up to contain the heat and cook the contents inside. Traditionally an open fire is used to heat it from the outside and burn away the fur, but in modern times a blowtorch also does the trick just as well. The fatty and tender product of the boodog is often eaten in winter when families need the nutrition to survive air temperatures as low and -40 degrees Celsius.

Honinii tolgoi – A cooked sheep’s head. Due to the extreme nature of this dish, it’s typically only consumed during a holiday or on special occasions, but can be found in a few restaurants around Ulaanbaatar too. A whole sheep’s head is placed in a crockpot along with potatoes and carrots, kind of similar to the khorkhog, and boiled for a couple of hours after removal of the fur. Then placed on a large silver platter or in a bowl, no part of the head goes to waste. If this turns your stomach a little, don’t worry, you’re unlikely to come across such a dish without it being a request made in advance.

No matter whether you are trekking through the Gobi Desert or spending time with a nomadic family in the Orkhon valley, and regardless of which of these traditional delights you have settled on for lunch or dinner, it’s paired by a cup of traditional Mongolian milk tea or a round of vodka. To read more on the drinks you may find during your travels in Mongolia, check out this blog on traditional nomadic drinks. If there is anything that doesn’t take your fancy, simply try a small sip, or politely accept the offering and then pass the dish on to the next person.

For the more adventurous foodies that visit Mongolia, let the sales team and/or your guide know that you want to try it all, and we will do our best to give you the full Mongolian cuisine experience.